Um, hi Toni, did you know that it’s almost April?

Well, yes.  We’ve just had a lot of “life” going on around here the last few months and I started this post and never finished it. C’est la vie and so I write about Valentine’s Day a month and a half late. I thought about deleting it but James really wanted me to share his cake with you. Plus, I think you’re going to want to make the peanut butter cups below.

We actually celebrated on two days. We had been dealing with some stressful things and without knowing it, James and I both decided to get each other presents a little early.The really crazy thing is that we did it on the same day! James came home with this beautiful bouquet of flowers: 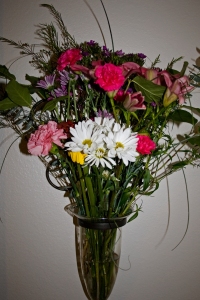 And then when he turned the corner he found this sitting on the kitchen counter: 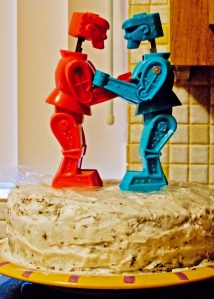 By the way, the cake was chocolate with orange flavored frosting. It’s the first cake I’ve ever made entirely from scratch. You can get the recipe for Hershey’s Perfectly Chocolate Cake HERE. But, I made it with Nestle cocoa. Shhhh . . . don’t tell anyone. I also used the same frosting recipe I always use, but added a little vanilla and orange extract for flavoring. It was yummy!

We celebrated on the actual day too.  I made these for James: (I think we are just now getting all these calories worked off!) 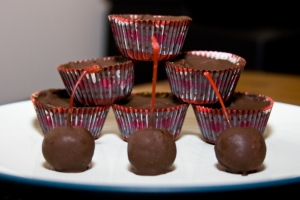 The cherries were super easy – I just dipped maraschino cherries in warm melted chocolate chips mixed with about a spoonful of shortening and let them dry on wax paper until the chocolate hardened.  Then I put them all in a sealed plastic container and stored them in the fridge. You can get the recipe for the peanut butter cups HERE.

I don’t have pictures yet, but James also made some new planter boxes for me.  He did a great job – they are really beautiful! I will be sure to take pictures when we get our plants planted in them this spring.

This entry was posted on March 28, 2011 by flipflopsallyear. It was filed under FOOD!, Holidays and was tagged with cake, chocolate, flowers, robots, rock em, sock em, Valentine's Day.