A wise woman and dear friend once told me that she and her husband always say I love you each time they get off the phone, or whenever one of them leaves to go do something without the other. They do it even, and especially, if they are in a fight . . . that way if one of them dies while they are apart they would have comfort knowing they said they loved each other the last time they spoke. James and I do this too. You might think that it’s a little morbid to think of these things, but I’ve lost a lot of people close to me during my short life. My dream and prayer is that James and I get to live to be old and gray together, and then die in each other’s arms at the same time (just like in The Notebook. I don’t care if that makes me a big romantic sap! :)), but I also know that our time on earth can be cut short in an instant, and it gives me comfort to know that if anything did happen to either of us, that the last words we would have said to each other would be I love you.

In February, my aunt passed away. She referred to herself as “crazy aunt Shelly” but I liked to say she wasn’t crazy, just a little kooky. 🙂 I miss her.  She lived in CA while I lived in WA and then moved to TX before I moved to CA so we didn’t get to see each other often.  When I did see her she had this knack for making me feel like I was the most special person in the world. I always knew that if I asked her about anything I would receive her very unsugar-coated honest opinion, but in a way that would never make me feel judged or belittled. It’s something I have always admired and appreciated about her. I also loved how when she got excited about something, her voice would rise and crack a little.  My grandma’s voice did it too. I miss them both.

This weekend a close family friend passed away. His family was like a 2nd family to me growing up. We spent a lot of the summer months with them when I was a kid, and every year my mom and his wife would pack all of us kids up and head to the OR coast for vacation. Their kids were a few years older than my brother and I, and we looked up to them like they were an older brother and sister.  My heart is breaking for their family and it’s times like these that I find it so hard to be far away from home.

Today is Easter and I have found myself reflecting a lot on death this weekend and the people I have lost during my life- both grandparents on my dad’s side. My aunt. A few close friend’s of my parents. Friends and coworkers of mine who were only in their 20’s. An old college boyfriend not long after we had broken up. Great aunts and uncles. Not in a way that questioned God’s judgement, but just in remembrance . . . and if I’m being really honest, with a twinge of self-pity in my sadness. As I thought about them and prayed about everything, I realized that I could dwell on the fact that I’ve lost so many people who I’ve cared about during my life, OR I could be thankful that I’ve had so many people in my life that I’ve cared enough about that it hurt to lose them. It doesn’t make me miss them any less, but it reminds me of all the joy and love God has brought to my life. He has given me a lot of people to love. And the gift He gave us through His Son at Easter blows my mind.

“For God so loved the world that He gave His one and only Son, that whoever believes in Him shall not perish but have eternal life. ” John 3:16

I had to remember that he never promised that we would have eternal life on earth with all the people we’ve ever cared about.  He’s promising that if we follow Him, we’ll have eternal life with Him in Heaven, and there won’t be any pain or sorrow there.

“He will wipe every tear from their eyes. There will be no more death or mourning or crying or pain, for the old order of things has passed away.” Revelation 21:4

And, He didn’t promise us that our life here on earth would ever be easy. He told us it wouldn’t be.

“I have told you these things, so that in me you may have peace. In this world you will have trouble. But take heart! I have overcome the world.”  John 16:33

He also said that with Him, we wouldn’t be alone while we were here.

“If you make the Lord your refuge, if you make the Most High your shelter, no evil will conquer you; no plague will come near your home. For He will order His angels to protect you wherever you go.” Psalm 91:9-11

Today, I am thankful that He has risen and is alive, thankful for the gift God gave us through Jesus, and thankful for all the people He’s put in my life. Thankful for YOU!

What are you thankful for this Easter? 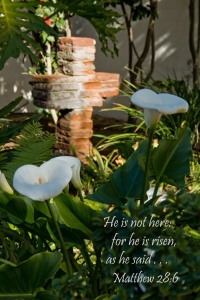