In celebration of Top Gun’s 25th anniversary (can you believe it’s been 25 years?!), Liberty Station held a free outdoor viewing of the movie. It was so fun! We went with a big group of friends. They had a giant blow up movie screen (I should have taken a picture), which they placed in front of the flag pole that stood beautifully lit and high above it. Top Gun was filmed in San Diego and there were even bits of the film that took place at Liberty Station. Every time it would show a recognizable spot the whole crowd would start cheering. And when the songs played, we all started singing. Liberty Station is sort of between the airport and Seaworld. It seemed like every time there was a dog fight in the movie that a plane would fly right over us. And the frosting on the cake? Right when Maverick shot down the planes at the end of the movie, the fireworks at Seaworld started going off. Perfect timing. It was great!

If you’ve ever read my about me section, you know that I named our hummingbirds Goose and Maverick. We have a third one that comes around once in a while. I think I shall name him Ice.

Ever wonder what Molly Green’s voice from Econobusters sounds like? Now you can find out! 🙂

Listen to her free seminars on Super Storage Solutions and Frugal Entertaining Options on her new YouTube Channel.

I’m a little behind on my blog.

For the 4th of July I had plans to make the most amazing cake. It called for four round layer cakes and the wow factor was high—a regular cake on the outside and an American flag on the inside when you sliced into it.

Except . . . I didn’t let the cakes cool long enough and sadly, they fell apart when I tried to take them out of the pans.

It was too late bake more but still early enough to make Strawberry-Rhubarb Dump Cake. This is officially going to be my old stand-by dessert of summer! I’ve made it twice for two different groups of people and everyone has loved it thus far. It’s really good and super easy. You should go make it right now!

Ok, back to the cake.

When we got home from the party I still had 4 broken layer cakes in my kitchen. It smelled divine in there, by the way. I considered dispersing them around the house to use as an air freshner. But that would be a waste of good cake so I decided to turn lemons into lemonade . . . or cake in to cake balls.

If you know me, you know I like direction, order, and following the rules. I’m learning that there are two situations where this isn’t always the case though—baking and building furniture. (That’s another story for another time). So, if you need specific directions, you might not like this recipe, but you can still do it. I promise!

You need two things. Cake and frosting. That’s it!

I’m allergic to soy so I make my own frosting.

I just start with a little shortening and add powdered sugar and water until I get the consistency that I want, and then add extract and salt until it tastes good. It’s really easy. If I can do it, you can too!

Next you just crumble the cake into a cake pan and start kneading in frosting until it forms a big ball. The first batch (white cake balls), I scooped in a bunch of frosting to start with and it ended up being WAY too much. I thought I was going to keel over into a sugar coma after eating just one. Hubby loved them though. The second batch (the blue ones) were a little better but for the last batch (red ones) I only put enough for it to barely stick together. The red ones were yummy.

Once the cake and the frosting are kneaded into one big ball, you just break them off into smaller balls and roll them between your hands until they are smooth. Pop them in the freezer for about 15-20 minutes. This just makes them easier to frost. Take them out, add a little frosting to the top and enjoy! I made a chocolate frosting for the top just by substituting the orange extract for cocoa. 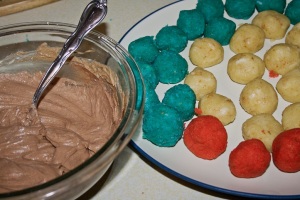 Even though I thought I had a caketastrophe on my hands, James was thrilled because he ended up with two desserts!

The Surprise in My Shoe

Pepper left me a gift on my most favorite pair of flip-flops this weekend. She’s left presents on James’shoes before too. I’m not sure why she has started doing this. Silly kitty.